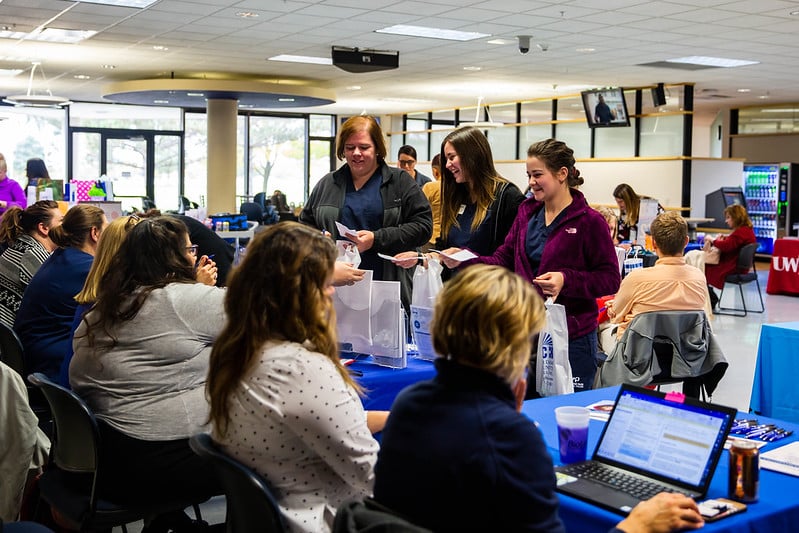 Students and community members were invited to network, see what careers are available in the healthcare field, and research continuing education opportunities.

In total, the event had 20 different booths and 12 door prize winners.

The SNA is already preparing for next year’s fair, which is being planned for mid-October. Stay tuned for more information on the date and details.

More details can be found here, or by emailing alemke2@morainepark.edu.

BOSS: The Black Experience in Business 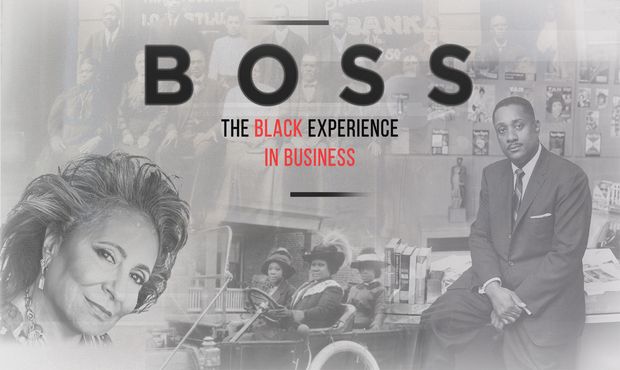 With the support of the University of Wisconsin-Extension, Regional People of Color, Fit Oshkosh, Wisconsin Public Television, Thelma Arts Center, and Moraine Park Technical College, the showing of “BOSS: The Black Experience in Business” was shown at Thelma Sadoff Center for the Arts in Fond du Lac on Wednesday, September 18. Casa Del Tequila provided dinner before the event and UW-Extension Youth Development Educators provided activities for children during the event.

“BOSS: The Black Experience in Business” is a must see two hour documentary that follows the lives of African American entrepreneurs in America over hundreds of years. It is an emotional story of discrimination and racial violence. Despite these barriers, the film also highlighted stories of courage, resilience, and success.

One such story is about Berry Gordy, Jr., the founder of Motown Records.  In 1957, already a successful songwriter, Gordy borrowed $800 from his family to start an R&B record company. Motown played an important role in the racial integration of America. Gordy had a unique gift for recognizing musical talent. Soul music artists under the Motown label include: Four Tops, Smokey Robinson, Marvin Gaye, and Diana Ross and the Supremes. Motown was the most successful record label of soul music for its time. Gordy official retired from the entertainment industry on September 24, 2019

Another story is about Ursula Burns. Burns, the former CEO of Xerox, was the first African American woman to serve as CEO of a Fortune 500 company. Burns started her career at Xerox in 1980 as an intern. She held various positions there before serving as CEO from 2009 until 2016.  She led a workforce of over 140,000 employees. She went on to hold the position of chairman of the board at Xerox until 2017 and has held numerous other board positions, including one at Exxon Mobil. She is currently chairman and CEO of an Amsterdam-based telecommunications provider.

Talented African American businessmen and women have been building successful companies in America for hundreds of years. Today, building upon their predecessors’ contributions, courage, sacrifices and willingness to help each other, we see African American managers and CEOs in most large corporations. To view “BOSS: The Black Experience in Business” check out the official website: https://to.pbs.org/2Tn9klg. The documentary can be rented or purchased on Amazon or iTunes.

Take a Test-Get Ahead of the Rest

Everyone wants to get ahead, race car drivers, jockeys, and yes, even college students. Finding ways to stay ahead of rising educational costs can be a huge benefit during the college years.

Students at Moraine Park already enjoy some of the lowest tuition rates among Wisconsin’s colleges and universities. Even so, another part of keeping college affordable is finding ways to decrease the amount of time (and money) spent completing a degree. At Moraine Park. students have a unique option to minimize their costs and maximize their credit earning potential through the school’s Credit by Exam opportunities.

Starting for Spring 2020, students interested in attending the College’s Nursing Assistant Technical Diploma program (Moraine Park Technical College course 543-300) will be able to apply for Admission to the College online. Students can access the application by navigating to www.morainepark.edu/apply. The online application became available September 3, 2019. Students will need to have completed the application, paid the one-time, non-refundable $30 application fee, and completed the Criminal Background Check process in order to be accepted to the Nursing Assistant program. There is no placement testing or transcript required for admission to this program.

Once students are accepted to the Nursing Assistant program, they will have a program code that will allow them to register for a section of 543-300. Students without this program code will be unable to register for course 543-300 beginning with registration for Spring 2020. (Fall 2019 registration is not impacted). More information about the Nursing Assistant program can be found on our website at https://www.morainepark.edu/programs/nursing+assistant/.

I am Cristal Gilbertson and a returning adult student to Moraine Park Technical College for the Early Childhood Education Program.  I plan to graduate in May, 2020.  Having worked in the child care field for more than 25 years, I love working with children of all ages.  I really enjoy how this is an ever-changing field with new research about how children learn and grow. I also apply what I learn as I raise my three sons.

I love to learn.  When the state required child care professionals to have more training, I embraced the opportunity. I completed two different credentials offered by MPTC – the Infant and Toddler Credential Certificate and the Early Childhood Preschool Credential Certificate.  Each certificate totaled 12 credits and required a portfolio.  It was worth my hard work because I was able to advance myself in the field and keep myself employable.  MPTC proved to be easy to work with throughout the process, and I had great instructors who wanted to help students.

As I am working on my Associate’s Degree, I really benefit from the small classroom sizes and the variety of courses you can take online or in the classroom; however, I prefer classroom courses. I am currently trying a new course format of a Video Conference for the Thinking Critically and Creatively course, which is taught by Dr. Rebecca Leichtfuss.  I am moving out of my comfort zone in this course, and I find it truly interesting. The TED Talks and real life applications in this course are awesome.

After years of teaching and now that my sons are growing up, I am looking for a career change.  I still love working with children. I applied for Credit for Prior Learning at MPTC and met with an advisor at MPTC to determine how I could complete my Associate’s Degree with the credits I had already earned.  After I earn my Associate’s Degree, I may choose a career in occupational therapy, and MPTC is helping me determine how I can transfer to a 4-year college to earn my  Bachelor’s Degree for this career change.

Together We Can Make a World of Difference 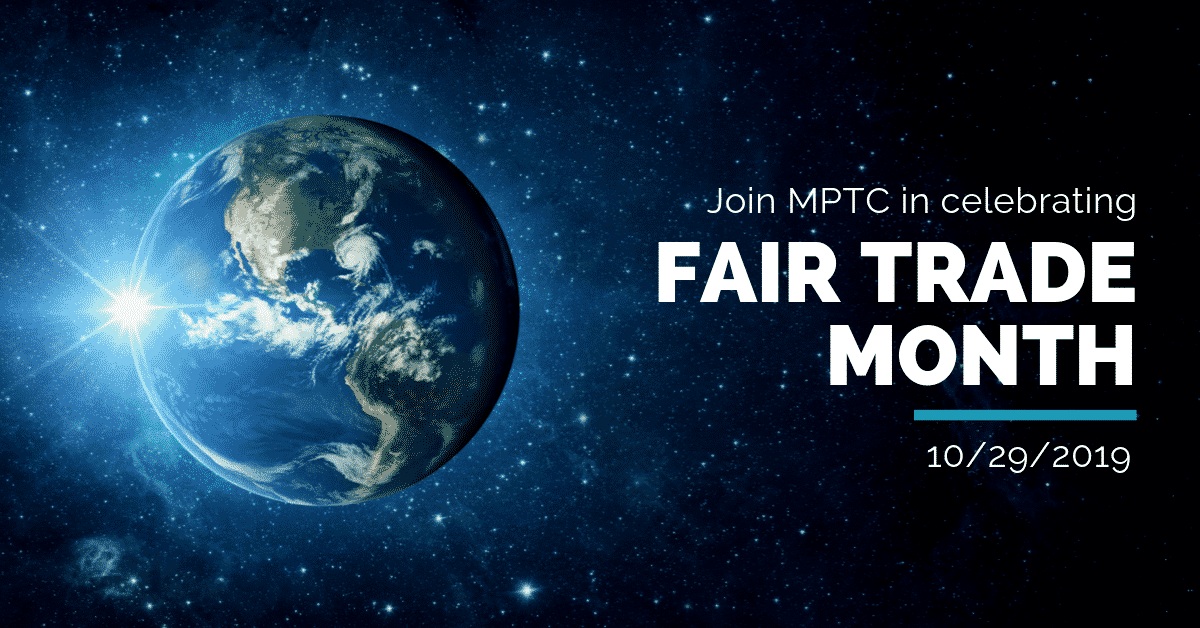 In celebration of Fair trade Month and Global Climate Change Week, a community wide Empowering the Conversation event will be held in the Moraine Park Technical Fair Trade College Fond du Lac Campus Commons on October 29. A Global Market will be open starting at 11 am throughout the day and evening. At 5:00 pm displays by area environmental groups and sales by Fair Trade businesses as well as Fair Trade refreshments prepared by the MPTC culinary arts students will begin.

At 6:00 pm, Miranda Paul will be the featured speaker with ” “Think Globally, Act Locally: Two Stories, Two Heroes, Many Ways to Help,”
Miranda has been a teacher in Gambia as well as the owner of a Fair Trade store in Green Bay. Her presentation will focus on two of her books, “One Plastic Bag” and “I am Farmer.”   One Plastic Bag: Isatou Ceesay and the Recycling Women of the Gambia tells the inspiring story of five women who creatively dealt with their village’s plastic trash problem. Despite limited resources and ridicule, Isatou and her friends persevered for more than a decade, eventually realizing economic empowerment through their recycled plastic purse project.

I am Farmer, written in collaboration with Baptiste Paul, is the true story of how environmentalist Farmer Tantoh is transforming the landscape in his home country of Cameroon. When Tantoh Nforba was a child, his fellow students mocked him for his interest in gardening. Today he’s an environmental hero, and bringing clean water and bountiful gardens to the central African nation of Cameroon.

Several of Miranda’s books will be available for sale and autographs.  Displays and the Fair Trade sale will be open until 8:00 pm.

Work While You Learn

An apprenticeship – what is that? Terri Kollmann, the Applied Technology/Trades Administrative Assistant answers this question quite often for students. It’s not a Boot Camp, and it’s not an Internship. To put it simply – You Work While You Learn.

An apprenticeship is an opportunity to grow in a well-paying, in-demand career. You can attend school while working a full-time job. Both Moraine Park and the company will work to train you on the full scope of your trade.

Caleb works for DeTroye Electric in Oostburg, WI. “I started my apprenticeship right out of high school.”

Josh, an apprentice for Dave Jones, Inc. in Monona, WI, switched careers after 39 years.
“I like that I’m getting paid to learn,” he said.

Tyler is an apprentice for Endries Solar & Electric, LLC. in Sheboygan, WI.
“I was a heavy equipment operator,” he said. “The best decision I ever made was switching careers after 41 years.”

Whether you’re right out of high school or changing careers, with an apprenticeship, you start with a job and build a career!

Do you think an apprenticeship might be right for you or someone you know? Do you have any questions?

From September 12 – 23, 2019, Moraine Park hosted 14 students and 2 instructors from the Peter Behrens Schule in Darmstadt, Germany.

A big thank you to our Culinary Instructor James Simmers for hosting this awesome opportunity, and all of our volunteers, Rachel Tease, Eric Ludwig, Heidi Sternig, Kevin Rodriquez, David Mulder, Kevin Niedfeldt, Jill Stiemsma, Bobbi Fields, Tina Cordell, Lisa Dougherty, Jim Daniels, Melissa Schmidt and Chris Frederick; and also to Tinesha Smith at the VUE for helping make this a tremendous experience for all!